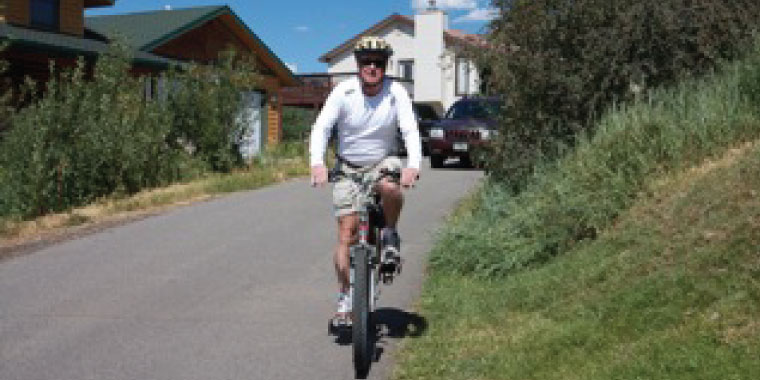 Glenn Cosh, DO, FAAFP (COM ’65) recalls a devout fascination he had from a young age with the stories of his elders, whether they were being told by his grandfather, aunts, uncles or parents. He was captivated by hearing lives chronicled through life’s mundane moments or the heroics of someone returning from war or even recovery from an illness.

And, throughout an acclaimed career in the healing arts, Cosh—now 83 and a prolific author and cycling enthusiast—nurtured a passion for engaging patients in caring for their health, often through stories, told and untold. The thread of stories as an essential part of the human experience repeated itself throughout Cosh’s career and continues to weave into the fabric of his life today.

“Certain factors in one’s life, predating college or even high school, help define the narrative for the direction we take,” Dr. Cosh said recently by telephone from his home outside Denver. “We’re all influenced by family, friends, education, our profession. When I chose medicine as a career, and specifically when I was accepted into the Kansas City University of Medicine and Biosciences, my love of stories changed course. I was taught that, as a physician we’re here to serve. Help patients feel recognized and improve their lives by giving them hope and dignity.”

“During my career I’ve treated many high-profile individuals,” he said. “However, people who have fallen on hard times deserve equal treatment and respect.”

He vividly remembers a young man who wandered into a clinic one night for treatment. Well educated, in his late 20s and a drug addict, Cosh’s patient revealed his tragic life story.

“He was a lawyer and, while living in Florida, started using drugs, subsequently losing absolutely everything,” Cosh said. “We spent time talking, beyond the reason he was seeking help at the clinic. I listened, he talked. It was an opportunity to connect on a very human level.”

An innate sense of empathy characterizes his distinctive style, as it did throughout his career as a family physician, as chief of family medicine at Swedish and Porter Hospitals in Denver and as president of the Colorado Academy of American Family Physicians and now in his volunteer work. A role he cherishes is husband to Erin and father to their three children and “Poppy” to six grandchildren. 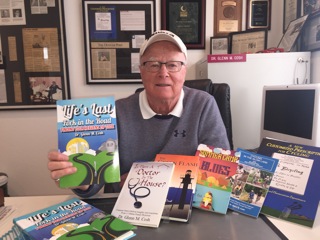 Cosh has always advocated for exercise and a regiment of physical activity as a prescription for wellness with his patients, especially cycling.

“Biking has an inherent pragmatic aspect,” he said. “Cycling for health follows my philosophy of practical, common sense medicine—the approach ingrained in me as a medical student at KCU.”

As a youngster with a newspaper route in South Jersey, the bicycle was a means to end for Cosh, but he was also energized by the sense of freedom it gave him.

Cosh took a liberal dose of his own medical advice and started cycling in earnest in the 1990s. During an extended convalescence to heal a serious leg injury sustained in a skiing accident, Cosh wrote his first book, “Cycling in the Slow Lane,” in 1993. A well-written cheerleading manual, of sorts, for the benefits of the sport, the book appealed to families and non-cyclists to adopt cycling as a foundation for good health.

“I had to heal for six weeks,” he said. “I’m not a TV watcher so I decided to put my thoughts about cycling for the non-professional into a book. Jogging was hot then, and cycling was overlooked. The purpose of the book was to position cycling as a fun, recreational activity that happens to yield good physical stuff.”

Cosh updated his book in 2010, following up with “The New Customized Prescription for Cycling.” Topics included the rules of cycling, how to be safe on a bike and more. Two more books quickly followed, including “Is There a Doctor in the House” (2013), that offered common-sense factors in dealing with the pain, fear, emotional and physical components of healthcare. One chapter addressed the importance of maintaining life balance; the book was well received by patients and doctors alike.

Today Cosh logs about 10 miles daily on his bike, relishing not only the positive physical attributes of the exercise, but also its ability to destress. He gathers inspiration for his writing from time spent outdoors, on the bike.

“I have a bad case of the cycling bug,” Cosh readily admits. “Probably since I was two years old I had the desire but as life happened, I didn’t religiously incorporate it into my life.  Historically we think of the bike as a toy that we get on Christmas morning or our birthday and then, as teens with a driver’s license, we beg mom and dad to have the car and the bike is left in the shed to collect dust. Thankfully, over the past years, there’s been a resurgence in biking here and across the world.”

“Summer Camp Blues,” published in 2016, was Cosh’s second novel and “Life’s Last Fork in the Road” (2018) examines the meaning of heaven.

“It’s a unique, thought-provoking book that required a lot of research and is a scientific and theological overview of heaven from a non-theologian’s point of view,” he said. “It asks the question—and often answers— ‘What zip code do I want on my tombstone.’ The notion is we choose where we live in life, on this earth, why can’t we do the same in the afterlife?”

Currently in progress is a book about Cosh’s time in Morocco, where he was stationed during the 1950s.

“My son, a writer and movie director in Hollywood, suggested I write this as a novel,” he said.

Miles to go, stories to tell

Heartily embracing his second career as a writer—and as an octogenarian cyclist who suits up and shows up on the biking trail—Cosh jokes that he “started writing about the same age Grandma Moses did when she picked up a paint brush. As a physician and now as a writer, I encourage people to make good choices. And I try to tell a good story in the process.”

Cosh and his wife enjoy their grandchildren, observing that “the grandsons and granddaughters don’t have the same acuity for listening to old Poppy’s stories, like when I was eager to listen to my grandpa’s. The high-tech era has changed the power of the story. Honestly, I have many stories that will probably never be heard.”

But Cosh plans to keep on riding and writing with gusto and purpose.

“I still have many bike outings in me and thoughts to express,” he said, excusing himself to work on his emerging novel.

If you own a business that is based in Missouri or you generate income from certain Missouri-based...

When Deepa Halaharvi, DO, became a breast cancer surgeon in 2014, she said a prayer asking God how...