Kansas City Mayor Sly James received a standing ovation from KCU students, faculty and staff after a recent conversation around his initiative of racial equity and inclusion. 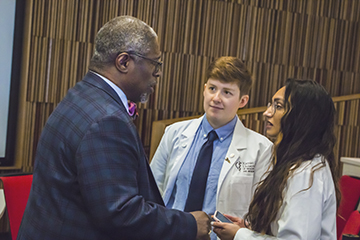 With his signature bow tie and the straight talk for which he is known, Mayor James got to the heart of an issue that plagues not only Kansas City but also communities throughout the country. And, as expected, he did so with authenticity, concision and candor.

“We have to talk about race without it dividing us,” Mayor James noted. Acknowledging that conversations around racism often go unsaid in an effort to avoid the discomfort of people “tensing up” when the topic is discussed, Mayor James insisted that open discussion is still the way forward. “It starts with understanding each other,” he said.

Throughout his talk, which could easily be called a master class on racial equity in Kansas City, Mayor James followed his own advice and delved deep into the topic. From touching on the history of segregation in Kansas City and its continued impact on the city today to detailing the myriad ways that he has made racial equity a priority during his eight years as mayor, Mayor James walked the KCU community through the complexities of developing plans aimed at helping both a city and the entirety of its residents reach their full potential.

Challenging assumptions that the decades since the Civil Rights Movement have healed old wounds, Mayor James made a point of emphasizing that while the red-lining that divided Kansas City years ago occurred in the past, the racial lines that it created have left deep scars that still mar the city today. Disparities in education and social determinants of health are significant for those living on opposite sides of the “dividing lines”, Mayor James noted. One particular statistic that he touched upon resulted in an audible gasp from the audience: in some cases, the Kansas City zip code in which one resides results in a 14-year difference in life expectancy.

Yet, he expressed hope and enthusiasm for the future. 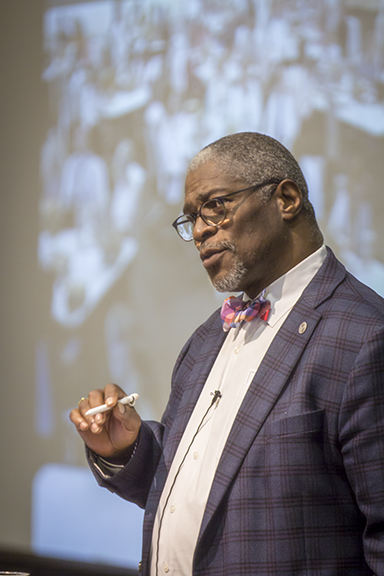 "What's going on in Kansas City is a renaissance like it's never seen before," Mayor James said. Although reluctant to speak of his own successes, much of that renaissance has resulted from his work as mayor. From revitalization efforts that have brought new industry and culture to the metro to embracing the history and diverse cultures and people that have long called Kansas City home, Mayor James’s leadership takes a holistic approach. So, it was fitting that he also spoke to the similarities between the osteopathic medical philosophy and what it takes to build and maintain a thriving community. After listing the tenets of osteopathic medicine, Mayor James specifically addressed the students in the audience.

“Most of you know this list, and since you believe in science you also know that it’s true. Now, I do not know medicine, but I do know that when my team and I are working to figure out how to improve the lives of those in our city, we check it against a pretty similar list.”

Closing out his talk, Mayor James shifted the conversation to his hopes for the future of Kansas City. As he prepares to leave office in a little more than 100 days, he had a few parting words of advice. He encouraged everyone, students especially, to register and vote in every election to ensure that their voices are represented in larger conversations. He urged everyone to to spend time with people who do not look like them, noting that “cross-racial love overcomes racial nonsense.” And, he asked them to go out and fight for a future that unifies us, even in small ways.

“I don’t particularly like the word ‘diversity’. It’s a great sentiment, but the word itself starts with the same letters as divide. I prefer ‘inclusion’ because it starts the same way as include. Now, the words might be used the same way, but I think we should go with the one that is rooted in bringing people together.”

As for KCU's campus community, Mayor James said, "Every time I come to this campus, it has been an inclusive atmosphere — and that's a damn good thing. Keep it going."

Reflections from a Graduate

Going to Kenya was one of the best decisions I have ever made.  Even as a person who had never...