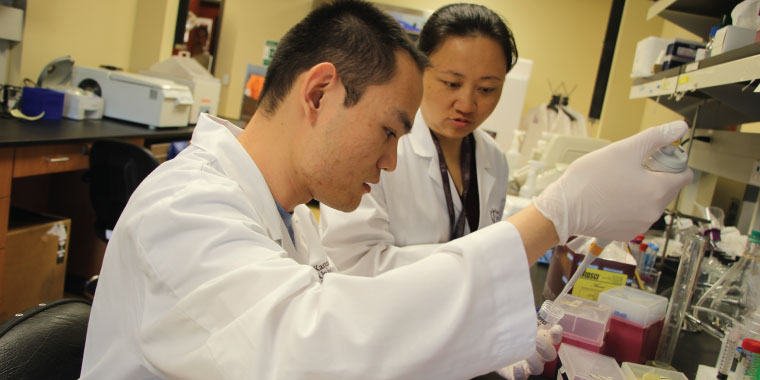 There is a tremendous need for new approaches to treating musculoskeletal diseases. Of the 57.9 million Americans injured annually, more than half incur injuries to the musculoskeletal system.

“We are very excited to have the University of Missouri join KCMD,” said Lawrence Dreyfus, PhD, UMKC vice chancellor for research and economic development and director of KCMD. “Broadening our membership to include the outstanding musculoskeletal and neuromuscular disease research groups on the MU campus will significantly strengthen the collaborative potential for research across our region.”

Formed in 2015, KCMD is the first initiative of its kind in Kansas City and provides opportunities to combine the individual strengths and resources of the three — and now four — health sciences schools to advance translational research. Sometimes referred to as “bench to bedside,” translational research harnesses knowledge from the study of basic sciences to produce new drugs, devices and treatment options for patients. The goal of the KCMD partnership is to build medical research teams that will focus on specific diseases to accelerate the process of turning discoveries into clinical treatments while also improving research education opportunities for health sciences students.

“The multidisciplinary nature of this collaboration is a perfect fit for Mizzou clinical and research teams working to discover new treatments and cures for musculoskeletal diseases,” said Mark McIntosh, PhD, vice president for research and economic development for the University of Missouri System and vice chancellor for research, graduate studies and economic development at MU.

“Partnerships among the MU School of Medicine, the Missouri Orthopaedic Institute, the Mizzou Biojoint Center the MU College of Engineering and the MU College of Veterinary Medicine already are making a tremendous difference in our state. We’re eager to combine forces with the Kansas City Consortium as we work to make a difference in the lives of Missouri residents.”

Examples of KCMD team focus include muscle/bone wasting, Lou Gehrig’s disease, oral bone and tooth loss and orthopaedic procedures that heal bone faster. The most common bone disease is osteoporosis, which leads to fragile bones that break easily. Hip fractures account for 300,000 hospitalizations per year; 20 percent of those patients die within a year and 20 percent are relegated to long-term care facilities.

“Anything we can do to stimulate team science across universities is a win for research and for our patients,” said Richard Barohn, MD, vice chancellor for research at the University of Kansas Medical Center. “There is so much talent in the areas of musculoskeletal biology and medicine at our four member institutions that programs like this one, which encourage and stimulate team science among our scientists, pays off in research findings, larger grants to our universities and ultimately in improved health care.”

“At KCU, we continue to seek innovations in treatment and the understanding of disease to improve the lives of patients and their families,” said Edward R. O’Connor, PhD, provost and executive vice president for academic and research affairs. “Partnerships and scientific collaboration have the potential to impact patients around the world. Our researchers look forward to working with the team at MU.”

Membership in the KCMD consortium also brings with it the incentive to collaborate around pilot research grants award of up to $50,000. The first round of funding began this past spring with an application solicitation going out to KCMD researchers and awards to be announced this summer.

“We see the pilot award program as one of the most valuable assets of KCMD in that it directly promotes new areas of research that will foster successful extramural awards for our scientists,” Dreyfus said.

The four institutions are scheduled to meet at the Second Annual KCMD Symposium at UMKC, tentatively scheduled for October.

Students and faculty showcased their research and learned from renowned scientists at KCU’s...

“If you don’t think this is cool, then you may be dead.” The light-hearted...