“It Was Easily the Most Terrifying 38 Minutes of My Life” 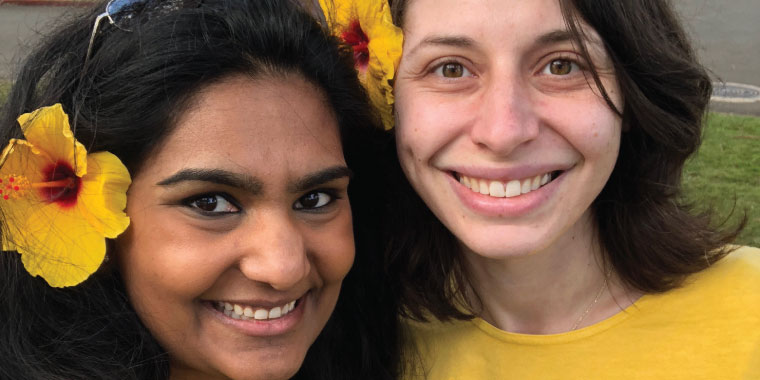 People in Hawaii received a scare Saturday morning after an emergency alert was mistakenly sent, warning them to "seek immediate shelter" from a ballistic missile threat. Forth-year KCU medical students Maaheen Ahmed and Elizabeth Reznikov are in Hawaii on clinical clerkships.

"My first thought was how does one even take cover from a ballistic missile?" Maaheen said. "I frantically started to Google the threat."

In the following email, Maaheen describes the chain of events as "easily the most terrifying 38 minutes of my life."

I had just woken up when I received the alert. Amongst all the recent talk about the threat of a nuclear attack, I panicked.  My first thought was, 'How does one even take cover from a ballistic missile?'

Another fourth-year from KCU and I had made plans to visit Pearl Harbor and the Diamond Head monument today, but all that seemed to vanish from my mind. Elizabeth and I began texting immediately and she said that her roommate was in the military and was legitimately concerned about the threat. They took cover in a small bathroom. I frantically started to Google the threat, but the interesting thing was that the only mention of it was on Twitter and Facebook. None of the news outlets had any mention of the threat. I read tweets about people saying they heard the air raid sirens going off and that people all over the island were taking cover anywhere they could.

In Waikiki, a lot of the hotels moved guests into their basements. I read other messages saying people were ducking under tables at restaurants. I'm staying at an AirBNB in the suburbs with members of the military, so naturally I went downstairs to see if they were concerned about it. They didn't seem to be at all. I came back up to my room to continue to research whether or not this was really happening. My thinking in that moment was that if a ballistic missile was really headed for Hawaii, how much difference would hiding in a bathroom really make? The other terrifying thing was that even though iMessages were going through, when I tried to call my parents in Houston, all the phone lines were busy. It wasn't until around 11 a.m. that I was able to get a call out.

Some time passed and I didn't hear any explosions. People on social media started reporting that the alert was a mistake and everything was fine. It was 38 minutes later  that we got the official second alert saying that the previous alert was false. It was easily the most terrifying 38 minutes of my life. Elizabeth and I did end up visiting the Pearl Harbor Memorial today and there was a palpable sense of unease. Everyone was talking about the false alert and parents were holding on a little more tightly to their kids. Being at Pearl Harbor was almost a surreal experience after the morning's events. Like that December morning, we had no idea that "attack" was coming.

AOA President and KCU alum will speak at 2021 Commencement

Kansas City University (KCU) is honored to welcome alumnus and current president of the American...