From Police Officer to Student: How the Streets of Ferguson, MO, Became a Call To Help Those Who Protect & Serve 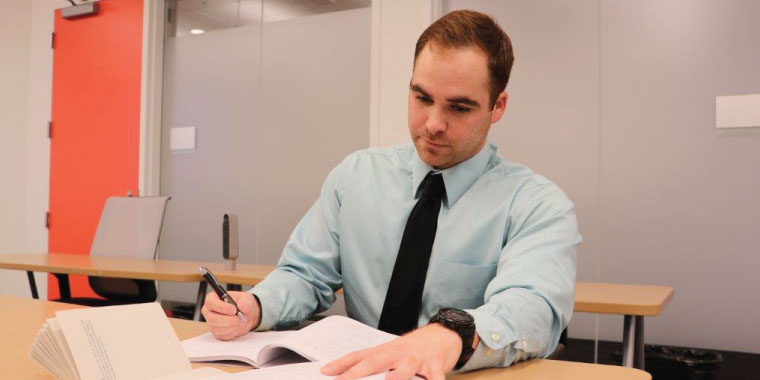 Growing up with both parents having careers in the military, Austin Camblin naturally felt compelled to follow a similar path. Camblin’s father suggested law enforcement.

In July, 2014, Camblin entered the police academy to become an officer; a goal he reached 25 weeks later. The young rookie would soon find himself working in the middle of “chaos.”

Soon after Camblin arrived at the academy, the city Ferguson in St. Louis County would be tossed into the international media spotlight. On Aug. 9, 2014, an 18-year old unarmed African American man named Michael Brown was shot and killed by a white police officer. Protests and arrests would follow.

“The instructors would have to go out there at night and come back. They wouldn’t get any sleep. You could see the fatigue on their faces,” Camblin recalls when describing the impact the events would have on his police instructors.

Ferguson remained in the news for months as racial tensions continued to simmer. Missouri’s governor declared a state of emergency in Ferguson. The National Guard was deployed. The city’s police chief and city manager resigned. The state supreme court took steps to restore public trust by reassigning municipal court cases to circuit court.

Then, in November, more chaos erupted when the county prosecutor announced a grand jury did not indict the police officer for crimes connected to the shooting of Brown.

In the new year, Camblin graduated from the academy. He was eventually assigned to the Ferguson Civil Unrest Detail. The one year anniversary of Brown’s death brought more demonstrations, more heavily armed police officers, another shooting, and more arrests. Camblin describes the scene in Ferguson as “surreal.”

“It was weird watching society basically collapse in a sense,” he said. “There was no sense of government, no structure, no organization. I remember it was just sheer pandemonium.”

Camblin continued to notice the stress and tensions taking a toll on his fellow police officers.

“When you’re standing on that line, facing several hundred people, you don’t know what their intensions are,” he described. “You are in a 12-hour state of heightened awareness.”

Many officers, Camblin believes, would succumb to “serious depression and anxiety issues.” He watched as fellow officers left the department and the profession. Camblin also noticed a lack of mental health resources to help them.

“Just with my co-workers, the amount of anti-anxiety medications increased. Officers taking these medications were so stressed out,” he described.

Ferguson would become a career turning point for the young officer as well. Camblin decided to leave the police force and enroll in KCU’s new Clinical Psychology Doctoral Program (PsyD).

“There’s so much demand for mental health professionals,” he said. “Officers are responsible for protecting people, but who protects them?”

In the summer of 2017, Camblin joined 11 other students to become the inaugural PsyD class.

“Given that both law enforcement and the military tend to have a very tight-knit, cohesive and unique culture, it can sometimes be difficult for “outsiders” to gain enough credibility to effectively reach, teach, treat or train these populations,” said KCU professor Robynne Lute, PsyD, who also mentors Camblin.

Camblin believes he has a good understanding of the challenges facing first responders who “pride themselves on being tough with bravado” and reluctant to show vulnerability. Camblin’s professors feel his law enforcement experience will help him connect with first responders.

“It will likely be easier for Austin to gain trust and relate to the cultures he wants to help for this reason, as he has been one of them,” Lute added.

Camblin received his undergraduate degree from the University of Missouri, which has nearly 26,000 undergraduates. Here at KCU, Camblin appreciates a smaller, “intimate” class size in the PsyD program.

“It’s so easy to get ahold of your faculty. They literally have an open door,” Camblin said.

While a five year program can initially seem like a tall hill to climb, Camblin feels confident he manage stressful situations after his Ferguson experience.

“Ferguson was stressful,” Camblin said. “With grad school and assignments, I will get those done. It’s not a life or death situation.”

As the first year in PsyD comes to a close, Camblin plans to decide soon an exact career path to take. He is considering working with first responders, especially those dealing with PTSD. He feels confident KCU will help him realize his goals and achieve them.

“I have been super blessed to go through what I did,” he said. “It’s given me a unique perspective… I’m excited for the future just to see what happens.”

Administrators and students at Kansas City University (KCU) had a rare opportunity to spend an hour...

A Call to Serve Others: KCU Student Shares EMT Experience

Inspired by his faith and his upbringing, a call to serving others has been a long-standing...