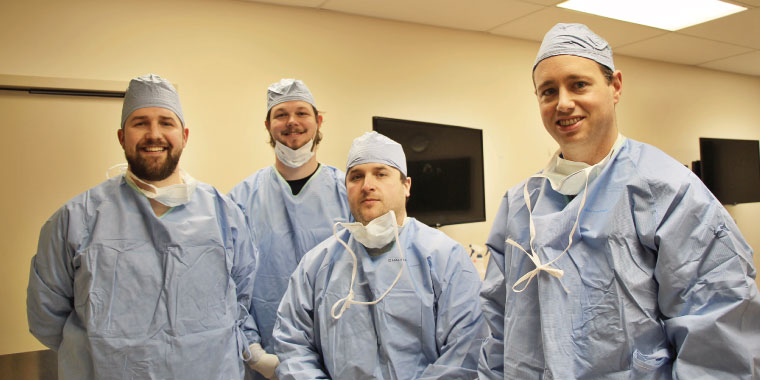 When Kyle Busch graduates from KCU on Saturday, May 20, his name will already appear on two major research studies that could impact the health of young athletes everywhere.

As a medical student Busch has been working with Dr. Matt Daggett, KCU alumnus and an orthopedic surgeon, alongside an international team trying to discover why girls involved in pivot-shifting sports suffer injuries to the anterior cruciate ligament (ACL) at a rate far faster than their male counterparts. They partnered with Dr. Camilo Helito of Sau Paulo Brazil and gained unprecedented access to clinical samples.

One of the studies Busch assisted with appeared in the Orthopedic Journal of Sports Medicine and discovered that a supportive anterolateral ligament (ALL) is half as thick in females as males. More force going through that supporting ligament leaves girls much more vulnerable to the dreaded ACL tear.

The implications of these findings are important, and an additional study also published in the American Journal of Sports Medicine that Busch and Daggett collaborated on shows a surgical technique that reconstructs the ALL and the ACL. This combined reconstruction was found to reduce the rate of re-injury to the ACL by over half and also increase an athlete’s chance of returning to play compared to traditional ACL reconstruction alone.

“It’s been a fun, dynamic project to be part of,” said Busch. “We’re not only helping young athletes return to play, we are giving hope to adults who would like to return to a sport they love even later in life.”

Busch, from Decatur, Illinois, became interested in orthopedic medicine after a high school injury landed him in an orthopedic physicians practice. Later, he joined a scholars and mentors program and spent time with the physicians because he thought bones and ligaments were “cool.” His fascination with the musculoskeletal system continued on into medical school as Busch began working on research with Daggett as a fellow in KCU’s Department of Anatomy.

“Kyle was critical to the success of our work,” said Daggett. “Our findings have changed my clinical decisions as a surgeon and are impacting sports medicine worldwide.”

Both Daggett and Busch have young daughters they want to protect from an ACL tear should they decide to take part in sports. Both hope to contribute to a body of knowledge that can eventually prevent the injury altogether.

“In osteopathic medicine our emphasis is on wellness,” Daggett said. “Lots of people talk about injury prevention but we are not doing enough about it. The more we understand the ligamentous structures, the better we will become at being able to prevent these life-long injuries.”

Busch says he hopes to be involved in future studies that Daggett conducts during his orthopedic residency at St. Mary’s Medical Center in Blue Springs, M.o, a suburb of Kansas City. He noted his appreciation to Daggett and the chance to participate in research during his student years.

“It’s great that KCU recognizes research is broader than the work done with microscopes and goggles in the lab,” Busch said. “They encourage students to get involved in work that results in immediate patient impact. It gives me a sense of fulfillment and enjoyment knowing I am able to take part in something that will help people live better lives.”

The Kansas City University of Medicine and Biosciences Joplin Campus recently partnered with...

For more than 25 years, KCU has offered Score 1 for Health, a children’s preventive health...